Last weekend I joined a few of my ex Rover friends from the Yallourn Capt Hurley Rover Crew on a trip up “The Mountain”. The mountain is Mt Erica in Gippsland. Most of us are in our late 50’s or early 60’s. We have mostly known each other for over 40 years. 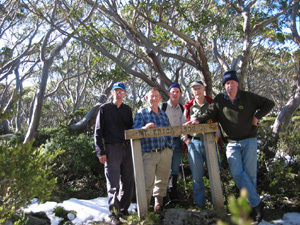 Our numbers were a bit down this year but here are the diehards at the summit of Mt Erica.

The Captain Hurley Rover crew built the JW McMahon hut on Mt Erica over many years starting from 1938. Its a basic but comfortable mountain retreat. It has given generations of scouts and other groups the opportunity to take time out in a relatively unspoilt and remote area in a safe way. From Mt Erica we can look down on the expansive Latrobe Valley with its several coal fired power stations. So close but a world away. The water on the mountain tends to be fairly clear with relatively low numbers of bacteria. In other similar hilly areas I’ve measured low organics in water using UV but this is mostly humic material.

There wasn’t much snow around this year. Global warming perhaps? Its often difficult to use scientific knowledge to prove that one factor is causing another so arguments tend to go round in circles. In the medical field there have been attempts to move towards a type of diagnosis that attempts to describe the patient’s current ‘situation’ and to infer how the patient’s overall condition has developed. Its like trying to explain something and the explanation is a model that is further tested and refined. Part of that refinement is through the treatments themselves.  Perhaps environmental problems could be tackled the same way.

We spent a pleasant couple of days together with no electricity (well except for batteries to play the iPod), no emails, no showers and only the company of Boris the resident Lodge rat.